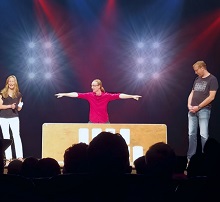 After watching a magic show in his hometown, Jett was hooked. At the age of 10 years old, Jett Skrien entered into the world of illusion, later becoming a highly sought-after performer due to his innovative, engaging, and spectacular performances. At the age of 15, he was making a name for himself performing around the midwestern United States landing significant shows for large corporations and events.

Jett has had the opportunity to perform internationally in Canada and Europe, as well as in the entertainment capital of the United States: Branson, Missouri. One of his leading accomplishments was attending a summer magic camp in Bryn Mawr, Pennsylvania, where he was selected, along with 100 other students, to learn the art of magic from superstars such as David Blaine, Criss Angel, David Copperfield, and Michael Carbonaro. 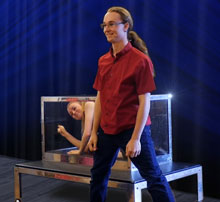 Jett has the unique ability to interact with the audience at a personal level through standup and grand scale illusions. Not only does his audience enjoy the show from their seats, but also through interactive audience participation. Partnering with his sister Lisi, a very successful figure skater, Jett’s shows are more than just magic; they are intriguing, engaging, and captivating. Jett’s shows bring the full experience with state of the art illusions, dancing, and full-scale lighting and sound, making his show one to remember.